The mosquito’s growth cycle is divided into four phases: egg, larva, pupa, and adult. Each one of these phases has a distinct look that makes it easy to identify. 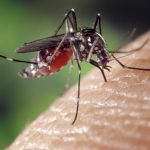 Eggs are deposited one at a time or in groups called “rafts.” The eggs float on the water’s surface. The eggs of Culex and Culiseta species are clumped together in rafts reaching up to 150 eggs. Aedes and Ochlerotatus deposit their eggs on moist soil that will be submerged by water, whereas Culex, Culiseta, and Anopheles deposit their eggs on the water’s surface. Many taxa, including Anopheles, Ochlerotatus, and Aedes, do not construct egg rafts and instead release their eggs individually. The majority of eggs develop into larvae in 36 hours or less; some may survive subzero winters before emerging.

The larva is an aquatic creature that has to come to the water’s surface for air. Larvae discard their shells four times, each time getting bigger. Most larvae breathe by siphon tubes and dangle inverted from the surface of the liquid. Coquillettidia and Mansonia larvae use plants as a source of oxygen.

Microorganisms and organic debris in the water provide food for the larvae. Because Anopheles larvae lack a siphon, they must lie horizontal to the water’s surface to obtain air via a respiratory aperture. Then, the larva transforms into a pupa during the fourth shedding.

The pupal phase is a non-feeding, restful developmental stage, yet pupae move, react to lighting, and crawl (tumbling) toward protected regions with a flick of their tails. This is when the mosquito transforms from a larva to an adult.

This technique is analogous to the metamorphosis observed in butterflies as they evolve from a caterpillar to a mature butterfly in the cocoon phase. This takes around two days in the summer for Culex species in the southern United States. Finally, the pupal membrane separates, and the mature mosquito (imago) breaks through after development is finished.

The delicate emerging adult remains on the surface of the liquid for a short period to enable all of its anatomical structures to solidify and cure. Before one can fly, the wings must expand out and dry correctly. Even after adults appear, blood-feeding and procreating do not occur for a few days.

Climate, as well as species variants, determine the length of each phase. Culex tarsalis, a prevalent mosquito in United States, for example, may complete its cycle in 2 weeks at 65° F and just ten days at 80° F. Certain species, on the other contrary, have evolved to reach maturity in as little as four days or as extended as a month.