How to Handle Gnat Bites

At first thought, gnat bites may not seem worth your worry, but there are actually a few substantial issues that can arise after being bit by one of these tiny pests. Imagine yourself taking care of a bit of gardening chores on a moist summer afternoon. You hear the tiniest buzzing sound—almost like a hum. You look around and notice a few black dots hovering around your head. You swat the air absently and resume your task. As time goes on, the buzzing becomes louder and you feel the slightest tickle on your face, neck, and arms. You stop and take in the scene, only to realize that while you were gardening you inadvertently became the target of a gnat swarm. This is a pretty common scenario in the summer time, especially in moist areas, such as near a river or lake, or even in your own yard after a summer thunderstorm.

The word gnat is actually a very loose term because it does not refer to any one specific type of insect. Most of us assume that a gnat is simply a baby fly, but a gnat can be one of many flying insects. The most common types are the black fly, midge, Hessian fly, gall gnat, sand fly, fruit fly, fungus gnat, and mosquito. Gnats can be found both inside and outside the home, which means that we all stand a moderate risk of experiencing gnat bites at some point. If you spend a lot of time outside or if you have indoor plants, then you might find yourself to be at an even greater risk of being bitten by a gnat . Gnats lay their eggs in sandy spots near water, such as ponds or lakes. Most species prefer moist, warm locations where there are plenty of plants and roots to feed off of. Some gnat species feed solely off of plants, fungus, or rotting fruit, while others are carnivorous and feed off of the blood of animals or humans. 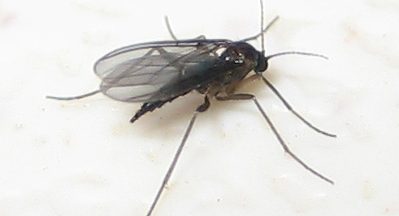 Gnats can be found all over the world. You have likely even found them buzzing around your home from time to time, especially if you’ve left over-ripened fruit on the counter for a while or if you have house plants that tend to be over-watered. Those of us that live near creeks, ponds, or other bodies of water are also more likely to find various gnat species lurking around.

Gnat bites are uncomfortable to say the least. The type of symptoms that you might experience from a gnat bite really depends upon what type of gnat has bitten you and you own body’s response to such an occurrence. In fact, most people don’t even realize that they have been bitten by a gnat because most bites tend to be asymptomatic, that is, without symptoms. Those that do experience symptoms with gnat bites are usually first plagued by an itching sensation around the bitten skin. If the area is scratched, the skin will likely raise in a pimple-like fashion with redness around the bite. The itching sensation can last for several days, especially if you give in to the impulse to scratch. Some gnats even tear at the skin to take in their meal rather than puncturing it with a needle-like nose, such as mosquitoes do, which can leave a red, bloody mark at the site of the bite.

In most cases, the worst reaction to a gnat bite occurs if an allergic reaction takes place. While allergies to gnat bites aren’t necessarily common, they do occur once in a while. The primary symptoms of an insect bite allergy include a skin rash, blistering, severe swelling, and bruising. Most allergic reactions are caused by saliva that is secreted by some species of gnat. The saliva includes proteins that prevent the blood from immediately clotting so that the insect can easily extract a filling meal.

It is very unlikely that an allergic reaction to a gnat bite will be as severe as a reaction to, say, a bee or wasp sting. If you do experience an allergic reaction to a gnat bite, then it is recommended that you take an antihistamine medication such as Benadryl. This will bring down the swelling, redness, and irritation. The bite may continue to itch for a few days but the other symptoms should go away within a few hours of taking antihistamine medicine.

When to See a Doctor

While we usually don’t feel the need to visit a doctor over the issue of a gnat bite, there are some circumstances in which it would definitely be appropriate to visit your doctor. A bite from any type of insect always carries the risk of a bacterial infection. If you consider the type of environments that insets tend to frequent, then you’ll understand the risks of contracting a bacterial infection from a bite. Signs of infection include increasing redness and odd discoloration, yellow-ish colored liquid seeping from the bite, increased pain, failure to heal, and, eventually, red streaks emitting outwards from the bite. Bacterial infections should be treated with an antibiotic, which you will need to obtain by prescription from your doctor.