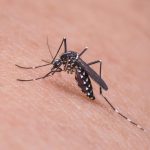 Although it is extremely rare in the United States, over 50% of the world’s population is in danger of contracting the disease. The majority of cases are found in Sub-Saharan Africa. However, cases have also been identified in South America, South Asia, and other parts of the world. Fever, headache, chills, and vomiting are some of the symptoms. If you visit a place where malaria is an issue, sleep under an insecticide-treated net and take anti-malaria medication.

Signs of the illness usually arise three days to two weeks after being infected. Symptoms include a high temperature, migraine, nausea, muscle and joint pain, and characteristic skin discoloration. Healing normally takes two to seven days. Dengue fever could turn into dengue hemorrhagic fever, a more serious type of the disease characterized by bleeding beneath the skin and frequent vomiting.

If you are bitten by a mosquito bearing this virus, you will most likely not experience any symptoms. However, some people have symptoms like fever, joint discomfort, diarrhea, nausea, or a rash. In addition, you should be aware of unusual problems such as encephalitis or meningitis, which are brain infections. This illness, which was detected in every state except Alaska and Hawaii, has no vaccine.

People and animals can contract the illness from infected mosquitos. Its name comes from the location in Kenya, where physicians first identified it, and it is found all throughout Africa. Saudi Arabia and Yemen are also affected. Dizziness and vertigo are common symptoms. Rift Valley fever also has the capability of damaging your eyesight.

The term originated from an African language and alluded to people’s hunched posture due to acute joint discomfort. A rash, headache, vomiting, and exhaustion are possible side effects. The virus originated in Asia and India, and it has now spread to Europe and the Americas. Although there is no treatment, the majority of patients recover. However, symptoms might persist for months or even years in certain circumstances.

It was initially discovered in the bloodstream of the snowshoe hare, so scientists named it after the animal. The first individual to detect this virus was in Canada in the 1970s. However, it had already spread to the United States by then. It produces a rash, headaches, disorientation, and nausea. In addition, it can sometimes cause neuroinflammation.

The name of the illness is derived from one of its characteristics, jaundice, which causes your skin and eyes to turn yellow. Headaches, backaches, chills, and nausea are all symptoms of less serious diseases. It is preventable with vaccination, so get one if you are going to locations in Africa or Latin America where mosquitoes carry it.

Most people only have moderate symptoms from this virus, such as a fever, rash, joint soreness, and red eyes. Pregnant mothers and their newborns are at the highest risk. It is connected to microcephaly, a birth condition that causes tiny heads and neurological damage. Mosquitoes carry the disease worldwide, notably in Brazil and other South and Central American nations, the Caribbean, and Southeast Asia.